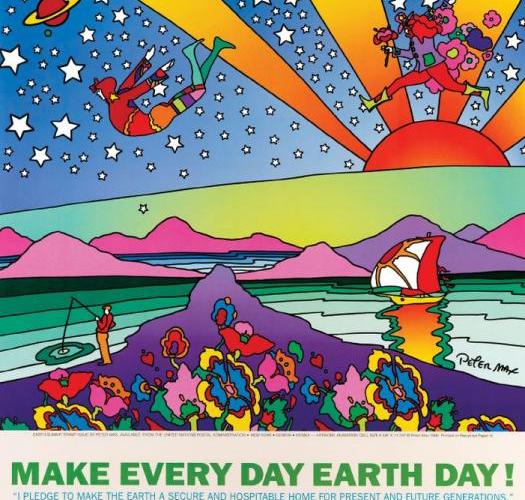 In 1976 my eighth-grade science teacher gave us an assignment that seems as if it possibly aligned with that year’s Earth Day activities. I recall this primarily because of its embarrassing results. We were told to dig up some soil from our family’s yard and bring it to school to develop our own little in-door plot for growing some plant or other. Being part of the only family in southwestern Ohio not possessed of an old coffee can or some other suitable container, I dutifully filled a black plastic lawn bag with what seemed like a lot of dirt and stuffed that in a gym bag. Managing to lug my Earth Day “earth” on to the school bus, I stuffed the gym bag in my locker. When the time came for science class, I opened the locker and discovered that the plastic bag had ruptured. I suppose I somehow wrestled my embarrassingly overflowing bag of dirt into class and eventually grew something, but that sickening demoralization of middle-school level humiliation was all that really stuck with me.

My hapless effort at dirt transplantation offers a metaphor of sorts for the Earth Day phenomenon. Well-intentioned individual efforts on behalf of noble aspirations to better the planet, even if more successful than mine, amount to relatively small achievements. The first Earth Day on April 22, 1970, was certainly a masterstroke in terms of generating citizen engagement and marketing an increasingly popular sentiment into a mass movement spectacle. It can even be argued that bipartisan passage of significant federal environmental legislation, such as the Clean Air Act of 1970, the Clean Water Act of 1972, and the Endangered Species Act of 1973, fed on momentum provided by Earth Day. Additional impacts included a surge in environmental organization memberships during the 1970s and growing influence of such organizations in legal actions against corporations and government agencies.