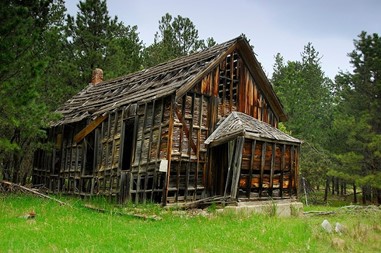 Louise is majoring in Science, Technology, and Society with a minor in Environmental Science. She plans on working with the parks system or in museum work.

When I was growing up, I spent my weekends going to ghost town sites around the Black Hills with my father. Each time we went to Spokane we made guesses as to whether or not the old community center that Elizabeth Cady Stanton spoke at would have collapsed (a couple of years ago it did) or if the Two-Bit Mill would still be standing (about 10 years ago it was bulldozed into a nearby ravine to better allow for nature to return to the area). Meanwhile, I watched as the Gordon Stockade was refurbished and preserved for visitors to come and see where the Gordon Party lived while in the Black Hills.

In college I have taken both history and environmental science classes and worked for a year at The Journey Museum, and I have only become more curious about how the decision to preserve some things and not others is made and how agencies decide whether to prioritize the environment or the history of an area. The optimist in me also hopes that maybe sometimes we don’t have to choose. Maybe, sometimes there is a way that environmental conservation and historic preservation are linked.

With that, I’ve spent the last several months doing research and developing a capstone that will help me to better understand how historic preservation and environmental conservation are implemented both individually as well as together. Part of the capstone paper focuses on considering suggesting whether the status quo should change. Another consideration is that there has also been steady change in population density and living conditions, which changes how the landscape is used by city planners and the population. Finally, I will look at how a particular place, building, or environment gets chosen for preservation.

For the capstone, I plan to focus on South Dakota, particularly the Black Hills. The Black Hills is an especially interesting location for the overlap between historic preservation and environmental conservation because many of the historic sites, which are former mine sites or mining towns, have an environmental effect.

I am excited to be working toward historic preservation of one of the mine sites in the Black Hills, The Golden Crest. Since its closure in 1906, the buildings have been burned, parts of the main mill have been taken apart for scrap, and the main shaft has been taken down and capped, though nothing will grow around it still. This area has both a historic and environmental significance given that it was at one point a prominent mine site in the Deadwood area. Thus, this is a site in which I can directly look at and be a part of the process of historic preservation at some level.

For my part in the preservation of this site, I plan to clear a trail, make signposts, and mark out where buildings used to be. Through this process, I will get to see more directly how the preservation process happens and the difficulties that come up as a part of it, as well as being able to put into practice the ideas that I may come to over the course of the next year.

3 thoughts on “Balancing Expectations: Preserving the Nature and History in South Dakota”